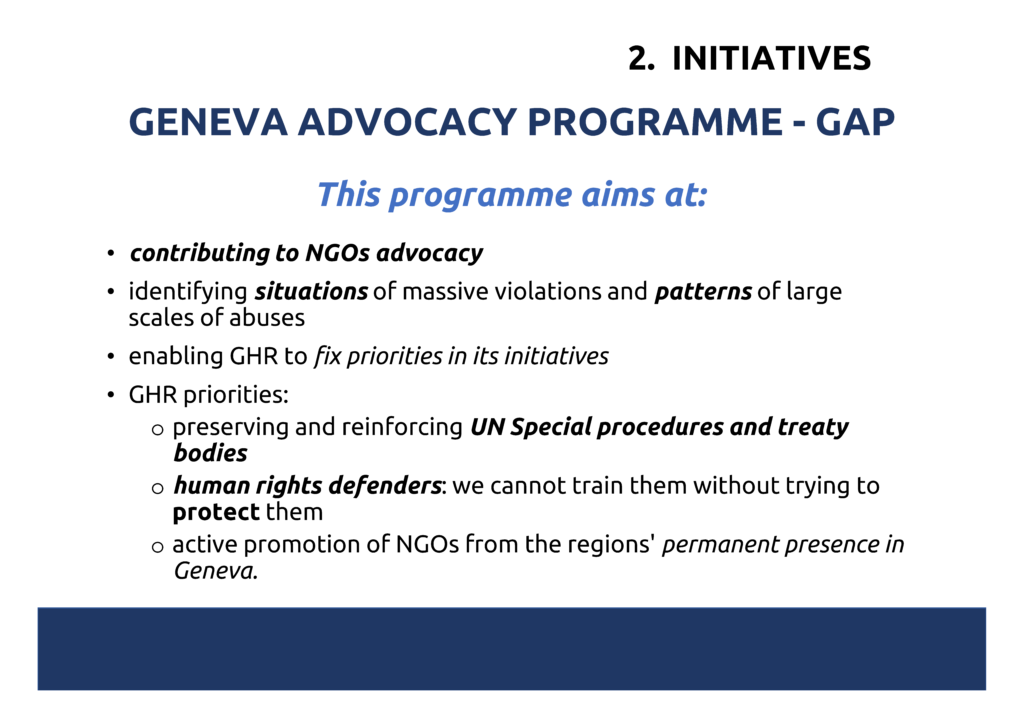 Our Geneva Advocacy Programme (GAP) was established to contribute to NGOs advocacy, both in the UN system and at domestic level. Responding to requests of our partners in the regions, this programme also helps to identify many situations of massive violations and patterns of large scales of abuses, which are still neglected by the regional and global bodies. Reinforcing the advocacy on these situations and themes is required.

When needed, GHR Senior Management Team, Executive Council and General Assembly may decide to launch a new implementation project on such situations and themes.

Human rights advocacy also depends on the defence of NGOs rights in the international system and on the full participation of NGOs and defenders from the regions, which GHR wishes to ensure.

As a training organisation specialized in teaching the use of international procedures, GHR cannot remain silent in front of the attempts of an increasing number of hardliner states to weaken the UN human rights system. We have to join NGOs efforts to strengthen this system, or at least to limit the damages caused by the current proliferation of negative states’ proposals. The replacement of the former Commission on Human Rights by the Human Rights Council (2006) led to the suppression of the former Sub-Commission. Once these experts had been reduced to silence, the Special procedures became the next target of many hardliner delegations. When adopting its institution-building package (June 2007) the new Council added (in a separate resolution) a Code of Conduct to be respected by the Rapporteurs. This Code was proposed by Algeria and imposed by the African Group. It highlights States’ sovereignty. It is a tool to reinforce the authority of the States and of the Council on the independent experts. Obviously, a code would have been more useful for those States systematically violating human rights…

Since then, false allegations, attacks and threats against Special Rapporteurs rapidly increased. Many countries accuse the Rapporteurs of not respecting the code of conduct.

For instance, the Russian and Chinese Delegations were behind two letters sent by several Ambassadors to the President of the Council, demanding measures against two Rapporteurs (31 August 2020). Russia tabled a draft resolution on the ‘methods of work of the  Consultative Group’ preparing the selection of the mandate-holders (February 2020).

The Russian delegation has been very active in the offensive. In New York, it took the lead to propose a review process to ‘strengthen the treaty monitoring bodies’. Special procedures and treaty bodies are also targeted through the reduction of funds available.

In 2019, GHR initiated a brainstorming process on the worrying trends in the HRCouncil, challenging the special procedures and shrinking the space for NGOs. Chaired by Prof. Bertrand Ramcharan, a first brainstorming took place (19 August 2019). It was followed by GHR Workshop on human rights in the 75th year of the UN and the future of Special procedures, chaired by Ms. Penny Parker (12 December 2019). The third Workshop was postponed due to the Covid restrictions. Instead, GHR continued to be actively involved in meetings of a core group of NGOs and in letters and statements regarding the Special procedures and treaty bodies, prepared by NGOs coalitions led by Amnesty International, the International Service for Human Rights (ISHR) and the J. Blaustein Institute. In 2020, GHR co-signed the joint civil society letter prepared by ISHR on the UN Human Rights Treaty  Body reviews, and the joint NGO submission to the co-facilitators of the General Assembly review of resolution 68/268 on the human rights treaty body system.

Still, many states with negative human rights records are not on the agenda of the HR-Council. For such forgotten and neglected situations, GHR continued to support initiatives of coalitions and networks. Thus, in 2021, GHR co-signing joint statements and letters to the HR-Council concerning Eritrea, Burundi and South Sudan, each time to demand the extension of the mandates of the Special procedures on these countries.

Over the last two decades, basic rights standards regressed around the world. In counterterrorism, some forms of torture were suddenly justified again. Kidnappings and arbitrary killings of those called ‘terrorists’ became common. UN debates on racism and FoRB led to unduly limitations to the freedom of opinion and expression. Increasingly, provisions were introduced in resolutions of the HR-Council limiting other rights to the domestic legislation, even when the domestic laws are contrary to international obligations of states. The most severe attacks concerned sexual orientation and women’s rights.

Partners in the regions have specific concerns on issues such as armed conflicts and humanitarian law; macroeconomic issues (economic system as source of violations); the fight against impunity; violence against women; and for their protection. As GHR highlighted in several of its Expert Seminars, a central question is to make soon significant progress in the eradication of extreme poverty.

Where GHR has expertise, such as on the rights of NGOs, the protection of defenders, enforced disappearances, indigenous peoples, freedom of religion, GHR has launched special implementation projects.

For other issues where international action is needed, GHR supports coalitions. On climate change, GHR joined the coalition, the Geneva Climate Change Consultation Group (GeCCco). On migration, GHR introduced the issue as a transversal theme in its initiatives, as it did in its Experts Seminars on indigenous peoples and enforced disappearances. Aware of the difficulty to put new issues on the UN agenda, GHR also support since 2019 a new campaign coordinated by GHR trainer Edward Flynn to promote a human rights approach in the fight against fistula obstetric fistula. GHR co-sponsored an Expert Seminar (22 September 2020) and a Webinar (17 November 2021), and joined an oral statement to the HR-Council on this matter (21 September 2021). A new NGO coalition is emerging. It shall probably need a legal entity, for which GHR will providing advice and orientation.

As discussed in our Assembly of 3 March 2020, GHR board launched a study project on the Covid-19 crisis. It was clear that those in the margins would suffer the most, and that a human rights approach had to be promoted in the fight against the pandemic. On 24 March 2020 GHR addressed a strong message to all those involved in the work of the HR-Council and to its partners and former trainees in the regions, highlighting solidarity with the victims, commitment for human rights and hope for a better future. Disseminated in English, French, Spanish, Portuguese, Chinese, Russian and Tamil languages, our message recalled the international community’s commitment to eradicate extreme poverty, expressed deep concern for the fate of the most vulnerable, and urged all GHR partners to monitor States policies and submit reports on cases of violations. Detailed reports on violations were received from Argentina, Guatemala, Honduras, India, Nepal, Philippines, West Papua, and Bosnia-Herzegovina, co-signed by GHR, and submitted to the Special procedures (NGOs).

The participation of defenders and NGOs from the regions is crucial for the work of the HRCouncil.

However, every year three ordinary sessions of the HR-Council, three UPR sessions, meetings of Working groups and Forums on major issues: practically the HRCouncil meets permanently in Geneva. NGOs and defenders from the regions cannot each time afford the trip to (and stay in) Geneva. Their effective participation in the work of the HRCouncil necessitates a permanent presence in Geneva.

Over the last years, GHR has been actively promoting this presence in Geneva of NGOs from the regions.

Since 2005, GHR contributed to the opening and strengthening of the Office of Forum Asia in Geneva, offering advice, technical support on institutional matters and participating in Forum Asia’s conferences, both in Bangkok and in Geneva.

We provided support to Tibetan partners to improve their strategies, and to prepare their European Rally (March 2018), and the visits of Tibetan victims. GHR was part of the Geneva Delegation to Dharamsala, which met with the Tibetan Administration and NGOs, and gave them a course on human rights, indigenous issues and climate (January 2019).

We also contributed to the (re)opening of the Office of Dominicans for Justice and Peace in Geneva (2017 to 2019), provided orientation to five coalitions preparing their work in Geneva, and assisted in 2020 and 2021 NGOs. In 2021, GHR initiated the preparation of a next stage in this support, namely the hosting of such NGO’s in its office.