The Universal Periodic Review (UPR) is an important additional tool to implement human rights within countries. The GHR specific training scheme on UPR covers all the stages of the UPR process: contribution to the State’s report; preparation of the stakeholders’ reports; State review in the UPR Working group; adoption of the report by the Group, and then by the HR-Council; and, follow-up in each country. GHR also contributed to the creation of UPR-Info, a documentation and communication tool for stakeholders.

In its Courses, GHR describes potential NGO contribution. It advises on the long-term perspectives, cooperation with the States and the use of all UN recommendations (special procedures, treaty bodies and UPR) in order to implement all the rights in each country. Naturally, each UPR Course addresses the specificity of the situation in each country.

As many NGO coalitions come to Geneva to attend the review of their country, GHR offers them briefings and orientation at each UPR session. 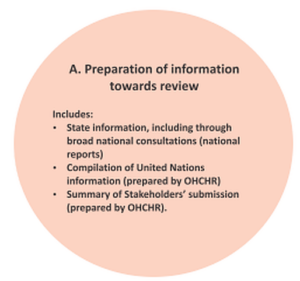 Created by the founding resolution of the HR-Council (2006), the Universal Periodic Review (UPR) constitutes a unique and additional tool for human rights implementation, at least in those States genuinely cooperating (even partially) with the mechanism. UPR is a review of States by States, but OHCHR summarizes NGOs reports in an official document for the debate on each country. NGOs have also to participate in the critical follow-up: the implementation inside the country of the recommendations accepted by the State. 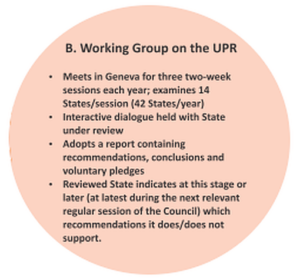 GHR has specific Course on UPR. In many In-Country Courses, GHR explains the process, the preparation of the civil society contributions, and the strategies to obtain the implementation of the UPR recommendations. 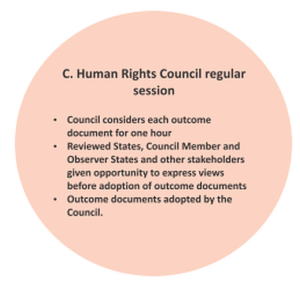 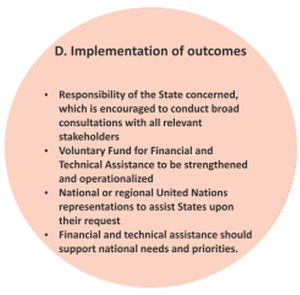 UPR and National Workshop in Botswana

GHR cooperated with NGOs from Botswana on the occasion of the third UPR review of that country (January 2018). After the review, together with the Botswana Centre for Human Rights DITSHWANELO, GHR convened a national Workshop in Botswana to facilitate the process of implementation of the UN recommendations (Gaborone, November 2018).

The UPR mechanism was at the centre of the GHR Course for Russian lawyers (Moscow, 9-10 April). Participants were asked to prepare a letter to the special procedures as well as an oral statement. One of them, representing Greenpeace Russia, presented her (improved) oral statement in Geneva during the pre-UPR session of May 2018.

Briefing to partners from Hong Kong

On 12 October, GHR welcomed several human rights defenders from the Umbrella movement in Hong Kong who came to Geneva to prepare for the review of China. As well as providing a unique window through which to monitor China, Hong Kong is a space where democracy and rule of law are demanded by many.

Advice to partners from Tibet

In 2018, GHR gave several briefings on the best ways to prepare stakeholders’ reports for China’s UPR (6 November). Unfortunately, in the wake of China’s 3rd UPR, the OHCHR removed seven submissions from its final document on civil society’s contributions.
On 17 September, GHR’s President chaired the side-event of the Society for Threatened Peoples on: ‘Human Rights in China – Seeking Solutions (the case of Tibet)’. He was also a panellist at the side-event of the Society for Threatened Peoples on the eve of China’s review (5 November). The GHR team attended the Forum convened by the Department of Information & International Relations (DIIR) of the Central Tibetan Administration, (CTA) entitled ‘Human Rights situation in regions under the PRC’ (2 November).

On 11 October, the GHR team met and advised a delegation of Churches in Nigeria at a meeting convened by the WCC on the occasion of the ‘pre-UPR session’.

Course for defenders from Morocco

At the request of the Friedrich-Ebert Foundation (FES), GHR assisted members of the Moroccan ‘Association Adala pour le droit à un procès équitable’ (hereafter ‘Adala’), who came to Geneva on the occasion of the review of Morocco during the 27th session of the UPR Working Group, which took place from 1 to 12 May 2017.

With several NGOs and in partnership with FES Morocco, Adala had prepared the stakeholder’s report for the review of Morocco. Ira Engel (FES) and Adrien-Claude Zoller (GHR) held a first briefing for two Adala members attending the UPR pre-session (4 and 5 April) to explain the process in Geneva, analyze the Moroccan NGOs recommendations and facilitate contacts with diplomatic missions.

From 1 to 4 May, GHR conducted a Course for the Moroccan coalition present in Geneva. It included a general course on the UPR process, the analysis of the priorities of Moroccan NGOs, the monitoring of the review of Tunisia, the assessment of the outcome of the review of Morocco, the drafting of a press statement and the follow-up strategies.

Assisting partners from the Philippines

Following a side-event by the United Evangelical Mission (UEM, Wuppertal) on 15 March 2017 GHR met the General Secretary of the United Church of Christ in the Philippines (UCCP) and discussed the best ways to support Filipino NGOs in the UPR process.

On 4 May 2017, GHR met the Filipino NGOs and discussed their programme until the review of the Philippines of 8 May 2017. This review was disturbing, as the Government tried to justify the ‘cleaning’ of the streets with summary killings, and brutally attacked UN Special Rapporteurs, in particular the one on summary executions.

The main human rights organisations from the Philippines spoke the next day at the Conference convened on 9 May 2017 by the WCC and moderated by Clementine Gaspar.

On the same afternoon, GHR gave a briefing to this NGO Delegation. The trainer of GHR analyzed the attitude of the Governmental Delegation. He explained how to deal with the recommendations made during the review. On short term one had to focus on the ‘deferred’ recommendations (those for which the Government did not take a stand during the review, but has to define its position before the UPR report adoption during the HR-Council of September). He also proposed elements for a strategy during the coming year.

After the adoption of the UPR report of the Philippines, GHR and the WCC convened a working meeting with Filippino NGOs and partners in Geneva to assess the achievements of the UPR process and prepare the follow-up activities in the country (25 September).

Support to the coalition of Indian NGOs

GHR intervened in the meeting convened by the WCC with the delegation of Christian Churches in India (7 April). The meeting was chaired by Clementine Gaspar. The delegation highlighted Increasing gaps in income distribution and religious intolerance.

For the review of India, GHR invited two of its partners to Geneva, Kirity Roy (a former GHR trainee) and Dipyaman Adhikary. The day after the review, GHR participated in the side-event convened by the Indian NGO delegation (5 May). During the discussion, Adrien-Claude Zoller commented on the follow-up to the recommendations and on the future strategies to implement international recommendations and to raise the Indian situation in the UN, in particular through the use of the thematic procedures.

GHR also met the NGO coalition from India during the 36th session of the HR-Council, on the occasion of the adoption of the UPR report of India (21 September). During this meeting participants prepared GHR post-UPR training held in Delhi on 3 October 2017.

NGOs from Indonesia and Papua in UPR

A former GHR trainee, Wensislaus Fatubun, spoke in the name of the Forum of Commissions for Justice, Peace and Integrity of the Creation of West Papua at the UPR Pre-session of Indonesia, convened by UPR.Info (4 April).

Invited by GHR to Geneva, Filep Karma, a former political prisoner, intervened during NGOs on the UPR Indonesia (3 May). Another GHR trainee from Papua read out the joint statement of NGOs before the HR-Council on the occasion of the adoption of the UPR report of Indonesia (21 September).

From 25 to 28 January, GHR assisted three defenders from Singapore who came to Geneva to monitor the examination of their country in the UPR Working group. GHR prepared several meetings for them with NGOs and diplomats. We gave them a briefing on the trends in the HR-Council and we had a last meeting with them to evaluate the outcome of the UPR examination and to prepare the press release and the priorities for the next initiatives.

GHR provided further orientation during their second stay in Geneva, when the HR-Council adopted the report of Singapore. On 24 June, Forum Asia organized with them a side-event on ’Singapore’s responses to the UPR recommendations’.

Briefing to students from Maynooth University

GHR assisted the Maynooth University in the preparation of the visit of 25 students to Geneva to observe Ireland’s UPR examination of 11 May. Thomas Harris and Adrien-Claude Zoller gave them a briefing on the UN mechanisms and procedures. GHR met again the students to evaluate the examination of the Irish situation during the UPR Working group.

Lecture at the UPR Seminar of Ebert Foundation and CIFEDHOP

The Ebert Foundation and the training centre CIPHEDOP convened a Seminar entitled ‘UPR a human rights awareness-raising process’. Adrien-Claude Zoller spoke of the experiences of the engagement of the civil society with the UPR Process. The workshop brought together 16 actors from civil society and national institutions and discussed various practices employed to use the UPR as a lever of understanding and dissemination of human rights.

Indigenous Peoples in Asia and UPR

As many NGO coalitions come to Geneva to attend the review of their country, since December 2008 GHR offers briefings and orientation at each UPR session. GHR main training activities during the UPR sessions in 2015 were:

GHR co-sponsored the ‘side-event’ of the Ebert Foundation and the Coalition of Dominican NGOs on the recommendations made during the review of the Dominican Republic (4 February). Maria Teresa Tienda Rivera also assisted the NGO coalition in the meetings with several Governmental delegations.

GHR efforts focused on the situation in the DR-Congo. GHR provided advice and orientation to NGOs from the DRC and to solidarity organizations (19 April).

GHR significantly developed its working relations with NGOs and lawyers from the Arab world. In 2013, it gave a specific Course to defenders from Saudi Arabia and a UPR briefing to a NGO delegation from Jordan. In January 2014, the President advised in Dubai a group of lawyers. During the 20th UPR session, it joined the Ebert Foundation’s initiative on Iraq.

GHR President opened the session and recalled that the implementation inside the country of the recommendations accepted during the review was the main aim of UPR. Close cooperation between Government and civil society was required. Iraq’s Deputy Minister of Human Rights, Dr. Abdul Kareem Shallal, commented on the recommendations made during the review, and the Chair asked him for several clarifications before giving the floor to the two non-governmental representatives present, Ms. Afyan Raheem Ali Ghulam Ali (Alliance for Rights ‘Houqoq’) and Mr. Haider Kadhim Khudur (ENSAN, Alliance for Human Rights).

A dialogue started between the three speakers on the main gaps undermining the respect of Iraq’s human rights obligations: the gaps between ratification of treaties, transposition into domestic law, and lack of implementation of the existing domestic law. Other questions were raised from the room, in particular concerning the Palestinians in Iraq and the severe persecution of the Mandaean minority.